Hi, my name is [removed] and I like to cross dress. I want to shave my arms and legs, but I think of the people I might hurt. I feel so ashamed, and wonder why me? I think a lot. Maybe I'm better off attempting sucide. I try so hard not to experience my crossdressing, but it gets worse. Help!

Joy has forwarded your letter on to me so that I can listen to your problems and, where possible, offer some advice and help. Not only that, she is going to use this as an example reply for publication (minus of course any mention of you personally!) to reassure others who are (so sadly) as firmly in the closet as you.

Firstly you must not feel alone or ridiculous in your desire to cross-dress. There are thousands of us who admit to it and ten times that many who don't admit to it. To some degree all of them go through the agonising mental conflict that affects you. It is the attitude of the more rigid members of society at large who are creating the problem, not you. Not all that long ago, social moralists were condemning women who had the effrontery to wear trousers in public and offend all those that set eyes upon them. Eventually the mini-skirt fashions gave them something worse to worry about! I have lived (and cross-dressed ) through the times that that were far more restrictive than our relaxed present. If I had been caught in the forties and fifties, I would have been put in the police lock-up overnight and charged in a magistrates court the following morning with "Behaviour likely to offend and cause a breach of the peace". Believe me, it was happening all the time. Parents took their cross-dressing teenage boys to psychiatric clinics to be 'cured'. This entailed dressing them in girls clothes and then administering severe electric shocks. After six months, any kid would tell lies and pretend he was cured to prevent further treatment. 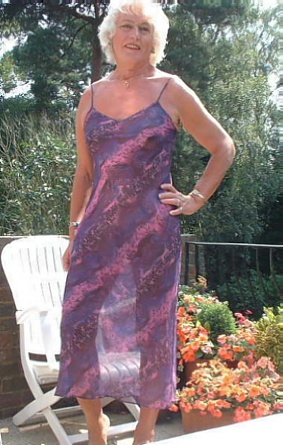 You, dear [???], live in a much more enlightened age. For a large part, how we dress, and how we look, is up to us and the scope is wide. Few people will comment, unless our appearance is outrageously ridiculous. No one has ever noticed that my 'unisex' style clothes have zip flies on the trousers that overlap right over left. Similarly my shirts (which are in fact smart cotton blouses). I swim at my local pool and I shower with the same bunch of guys afterwards every morning. In ten years not one of them (they are outspoken enough to say anything they feel like saying) has commented that my legs, arms, armpits and bikini line are always shaved smooth. I personally know one or two heterosexual men who do not cross dress that prefer not to be hairy and consider it refined and civilised for men to have waxed legs and armpits. Just try it yourself for a while and have a few replies (not excuses) ready for anyone who may dare to say anything! The only comments I have ever had have been from ladies, all of whom have congratulated me on being considerate to their own sensitivities and sparing them the sight and feel of a rough smelly hirsute body.

Your distress comes from a misplaced sense of shame and a self-conscious feeling that others will notice and object strongly to your appearance or to the idea of you dressing in feminine attire. Many of us have 'come out' to friends and family. Those who have done so are amazed at the acceptance and encouragement that they receive in return. Speaking for myself, I get plenty of invitations to parties, dinners in restaurants, outings to the theatre etc. from friends who genuinely seek out my company in places where there are no other tvs, cds or tgs. Many of my friends have never met my male self. Several in their twenties and thirties have gone out of their way to introduce me to their parents without any embarrassment. I know I am not unique in this from my dialogue on this website with others.

What I am trying to tell you is that crossdressing is widely accepted by ordinary people with less bias than being black, gay or lesbian. (Of course you might also be black and gay as well!) At the moment you are not even attempting to 'pass' in public, you just want to be your feminine self at home. There is undoubtedly a feminine personality within you aching to develop and express itself. Why should you deny its existence and spend your anguish trying to suppress it? One fact is certain; no one has found a 'cure' and nobody 'grows out of it' or replaces it with a marriage partner. You have got it for life. You must accept it and find out who this other personality you have got really is. Count yourself lucky that you are one of those fortunate people that have both a male and a female personality and all the extra emotions and sensations that go with them. Your development will take time. It will be helped enormously if you drop the guilt and concentrate on the discovery. Erotic pleasure often looms large in the early stages of your development, but this is less important as you start to concentrate on achieving a realistic 'sculpture' of the woman that you have in your mind that you desire to be.

Once you sense your new identity, the clothes and the make-up become natural and commonplace. The real and difficult stuff is learning voice changes, stance and posture, body language, gestures and the female mentality. These actually matter more because they are the essence of your femininity. They will be more important to you in your own judgement of your accomplishment.

There are certain practical steps that will help you.

Either go to one of these very understanding and pleasant ladies (not prostitutes!) who will give you a 'make over' for an hour or two in return for a fee of about sixty pounds, or develop your wardrobe and technique privately at home. The objective is a passable photograph that you can be proud of. This photograph is the passport to explaining to others that you are a crossdresser and that the result is not as awfiul as they would imagine. Going to the make-over lady has the advantage of keeping everything away from home ( if that poses a problem) and also provides a fast track learning system in technique. Quite possibly it will help you overcome your feelings of guilt and shame as well.

Lastly, though I expect you to write again, think of your crossdressing desires as a harmless and inoffensive pastime by comparison with the so called macho males who will spend all day on a river bank torturing fish with a line and a hook, then going back the next day to do it again to the same fish. I think there are about as many males who are secret cross-dressers as there are anglers. Some are so mixed up they do both, but not simultaneously! Let the anglers think about suicide, you have much more pleasant things in life to look forward to.

What the public say

There is an immense amount of effort, all voluntary, and e involved in maintaining LivinDoll. If you have appreciated this website, please make a donation of £5 by secure transaction towards its maintenance and improvement.